There are about 1400 plants which are called mistletoe in the widest sense. However, the cancer medications presented here are produced exclusively from white-berried mistletoe (Viscum album L.).

White-berried mistletoe grows on deciduous trees and conifers. It occurs particularly frequently on poplar and apple trees, but also on maple, birch, lime, robinia, willow, hawthorn, almond and - rarely - oak and elm. Among conifers, it prefers pine and fir trees.

White-berried mistletoe grows all over Europe, but also in North Africa and the Middle East. In Asia, mistletoe has yellow to orange berries (Viscum coloratum). In Northern Europe, it grows only rarely because it cannot survive extreme frost below -20 °C. In the south, too much sunlight and drought limit its occurrence. The rare oak mistletoe grows mainly in France and is also cultivated in Switzerland.

Mistletoe has many characteristics in growth, development and reproduction that differentiates it from "normal" plants. Rudolf Steiner, the founder of anthroposophy, recommended mistletoe as a medicinal plant in cancer therapy at the beginning of the 20th century.

When a mistletoe embryo germinates, it first generates a small stem. An adhesive disc develops on it, with which it attaches itself to the tree bark. A suction tube (haustorium) now grows out of the middle of this adhesive disc, pushes through the tree bark into the germ layer (kambium) and forms a sinker from there. Now the mistletoe receives water, minerals and nutrients via the sinker, i.e. indirectly via the roots of the host tree.

As the size of the tree trunk increases over the years, the sinker grows outwards with it and its base is covered by more and more layers of wood. As a result, the mistletoe is anchored deeper and deeper in the trunk without growing deeper itself.

Around late summer, a mistletoe embryo that has germinated in April will have found a firm grip in the wood of the tree trunk with its sinker. Now the germ rests again until April of the following year. Only then does it begin to rise up and sprout two green leaves from the top. This is followed by another year's rest. Only four years after the first sprouting three new stems will grow from the middle of the first stem: two laterally and one in the middle, each with two leaves. From now on, new stems and leaves will appear every spring, but only in the axils of the previous year's stems. The central bud becomes the inflorescence. 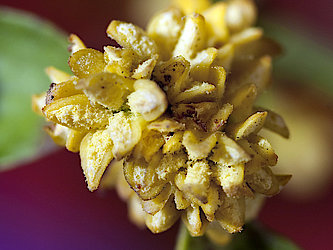 Male mistletoe flowers have countless stamens with pollen on each petal. 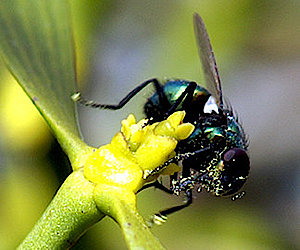 Flies, but also bees, bumble bees and beetles are the most important pollinators for mistletoe flowers. 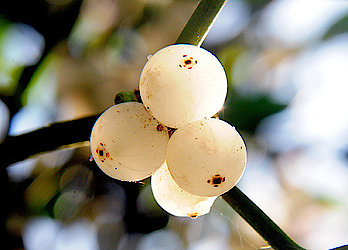 The white mistletoe berries contain 1-3 embryos from which the next generation of mistletoe plants will germinate.

Mistletoe is a dioecious plant, meaning that male and female flowers grow separately on two plants. Mistletoe blooms for the first time only after five to seven years, but earlier in the year than most other plants: in winter, between February and March.

Mistletoe’s inflorescences secrete a kind of nectar with an orange-like smell that attracts flies, bees, bumble bees, ants and many other insects for pollination. After pollination, the female inflorescences rest until about the end of June. Then the fruits slowly develop with the inner green embryo until they are ripe in Advent, early December, and light up as white sham berries. As with humans, it takes a total of nine months for the germ to ripen. It is not a robust seed, but an embryo that is immediately germinable and embedded in green nutritive tissue. To survive, it depends on light that can penetrate the transparent berry skin and the gelatinous flesh.

In order to sprout, the germ depends on a bird releasing it from the berry. Two bird species in particular are specialised in this: the mistletoe thrush and the blackcap - each in its own way. During the winter months, the thrush eats the ripe berries and excretes the green mistletoe embryos undigested via bird droppings. The sticky remains of the fruit enveloping the embryos make them adhere well to branches and twigs. The blackcap is a migratory bird that returns to Europe from the south in March. It picks the berries that have not yet been eaten by the mistletoe thrushes from the mistletoe bushes, but only eats the juicy shell. It glues the green embryo to branches and twigs of the host tree, where it can germinate very close to the mother plant. The embryo is extremely robust: it can remain on a branch in its slimy, sticky shell throughout the winter until it sprouts, usually in April.

When choosing their host trees, the mistletoe germs of conifers are particularly selective: pine mistletoe grows only on pines, fir mistletoe only on firs. Hardwood mistletoes are less demanding. They also germinate on other deciduous plants than the mother plant, but not on pines or firs.

It is not without reason that the botanist Karl von Tubeuf wrote in his mistletoe monograph at the beginning of the 20th century: "Nothing about this plant is normal". Mistletoe differs from "normal" plants in all its essential characteristics: 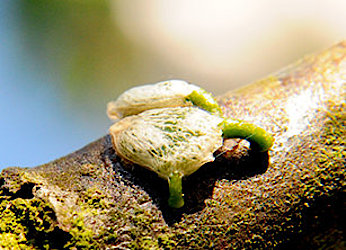 A mistletoe germ stretches out its "little feet" – with their adhesive discs it is able to grip on the branch and sprout further. 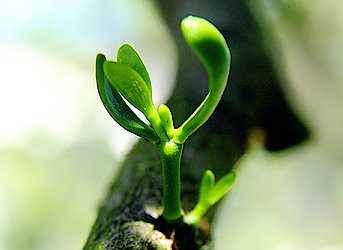 Only after two years – as seen here on this sprout – the first leaves appear. Next to it there is a one-year-old small mistletoe plant. 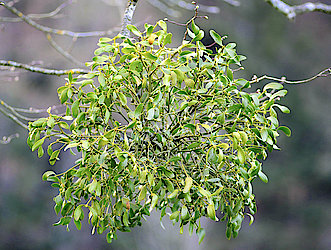 A magnificent mistletoe bush – already several years old and sprouting in all directions, forms its spherical shape over time.